I wake with a headache

It’s early and the trains are passing and a cow is crying.
It’s not Spring so I wonder why a cow would be upset this far into summer.
Has someone taken her last calf? 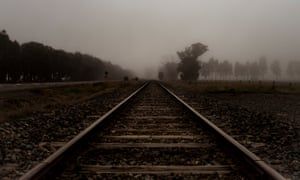 I am in the bed my father used to sleep in as a child and years later as child, I did as well.
There is dust everywhere and the smell of old.
My jaw and neck are tight.

I used to hate coming here.
Now it’s not so bad, it’s a duty that I feel strangely proud to perform and I have learned so much in the murky visits listening to my father.

I am not staying with him.
I never do, it’s not safe despite his meds.

I stay with my Aunt next door, who was 93 last week.
She is an ox.
She still demands I eat despite saying I have put weight on.
My headache intensifies as I lay in bed because no one wakes here til after 10.

They are all old and I feel older just being here in the dust and clutter.
I think that my body is holding the memories of trauma and my body knows best.
I am staying one night more then off back home.
To my own clutter and dust.
There’s a time to move on and a time to stay.

My aunt defends my dad again.
‘He was never violent.’
I sigh.
‘I was hit as a kid, it never hurt me.’
I say nothing for a while as I lean against the cool wood of the bathroom door that she has bailed me up against.

I tell her that dad started to admit things to me.
That his illness has hidden all these memories, as he could never come to terms with the monster he was.
But now he is starting to and that this is good.

Last night he said that he was the kind of man that created the women's movement.
I wasn't sure if it was a boast.
He said he treated women terribly.
I asked if he could go back would he be different.
'There's no going back' he said too quickly.
'But if you could?' I nudged carefully.
'Of course' he almost snapped.

I have told my Aunt about these discoveries before but she has a hard time reconciling what he did to who he is now.
He does too.

Me coming here and asking brings these memories to light.
It helps him remember.
Well, It helps me at least but I think it also helps him lift the veil of disassociation.

I know this.
I disassociate too apparently.
I leave myself because of trauma.
Trauma that he is somewhat responsible for.
I perform myself and go into other bodies.
I pretend I am OK too often when I am not
I freeze and forget things.

My body doesn’t.
My body remembers.
My headache screams through my Aunts justification of my dads behavior.
I excuse myself.
My body knows.