One night in Austin 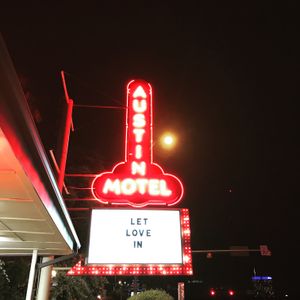 I drive into Austin with knickers jumping after giving Fort Worth a quick peck as I packed up quick and left without looking back. The long, hard drive, musical expectations combined with my pulsing ovaries mean I slide into Austin town as toey as double pluggers. The Airbnb has 'The home of the brave' pillows strewn on the American flag bedspread, I throw them on the floor after taking note... ‘when in Rome’.
I tart myself up as much as I can from a backpack filled with hiking gear.
I have the one dress.
It's a popular dress, people comment; it's bright and pops.
I let myself, the dress and Austin down when I thow on old lady, pink Birkenstocks instead of the illusive cowboy boots I hoped to find at the thrift stores I had frequented, seeking a old Kalamazoo.
I needed them boots because I might meet that fantasy Texan cowboy who loves sad, achy pre 80's country music, feminism, foreigners and dresses that pop!
Guess he’ll have to be less deeply superficial than me.
I pop lipstick on to pop more and to hopefully divert away from my pink lesbian sandles.

Austin is a music town and I have been aching for music that makes you ache sweetly. Oh, that and aching for that liberal Texan cowboy.
I dive into Red River St, scented, bright and eyes darting and sparkling like largemouth bass.
I come ashore at Stubbs.
There's no one there.
It's Sunday.
Seems the sinners are either recovering or at mass.
"Where are you from" asks the napkin folder in cowboy boots you could catch a real Texan in.
"S'traylia" I thicken my accent to match hers and the humidity.
"I'm looking for live music, country preferably but not the sweet stuff"
I try and hide my feet.
"Well you picked the wrong night, nuthin' much happening on a Sunday"
"Yeah, I can see that"
"Try 'The Cronical'"
She yells to the bar for a copy and one is delivered with my cheque.
It's closing time. It's 8pm.
I check the street press section; it sure is a quiet night.
Ethan Hawk is in town promoting his movie about Blaze Foley, called ‘Blaze’.
Blaze and Townes were co-conspirators in music drinking and untimely deaths.
Hawke is speaking at Waterloo Records.
Should I pop in on my one night in Austin?

Nah, that would be too, too in my search for 'authenticity'.
Mmmmm.... What even does that mean?
After the hyper-reality of American freeways and television, I no longer feel that confident about that word…. especially without boots.
I read that in Saxon's ‘The Resentments’ are playing.
I think I recall that name but maybe just the notion.
I head there.
Steve greets me
'Love your Tom Fords', he bellows with a wide generous smile.
'They're fake' I smile back.
No wonder I am having a hard time with authenticity.
Steve is a friendly chap who spruiks the band well and so pay my $5 entry fee and go to get a drink.
The bar is dark, gloomy and steeped in that history you imagine to be legendary.
A man lops up and introduces himself.
He is extra friendly.
I take a deep breath.
The combination of my dress, pulsing ovaries and what he has imbibed has him sniffin' like a hound.
I pick my nose as he tells me about himself.
He’s a seaman on dryland and shows me his boats like a proud father.
He is a professional sailor on tall ships.
Shame he’s drunk, he could have been an option if Mr Texas doesn’t show.
I excuse myself to listen to the band.

They’re all sitting down as they play; they’re older and weary.
I like them.
The singer has range, gravity and gravel.
I start to relax, nice one Austin.
Four songs then they end.

The next band sets up
Steve hollers from the door when he sees the Strat.
‘LOVE YOUR STRAT, MAN!’
Steve likes labels it seems, America likes labels.
Authentic labels. Labels with history and passion.
Labels with street cred and toughness.
I place my dress over my sandals.

So far three bands have played since 3pm.
The next band Mission 2 Mars is motley and really good, but not as weary and I miss the weary. I get up after their first set, say goodbye to Steve who offers to show me around the green room. It’s lined with photos of the legends.
I found something authentic.
Thanking Steve, I disappear into the hot night, wishing I could leave my fucking slippers like Miss Cinders, but there are needles and I promised someone I would be careful.

I head to Antones.
A bigger cover charge of $20
But worth it and more.
There are 8 people here.
The singer/Hammond player is in a wheelchair and is in his 90’s.
I don’t get his name just his life force as he jabbed and swayed like Ali.
He’s the boss and I watch Oscar Ornelas dance around him, both not weary at all, ‘til past midnight.

I’m at the bar trying to finish my third drink for the night.
I can’t. It’s too strong.
Curse it, another reason I needed boots.
The band ends, and I disappear my feet flapping vulgarly, like a drunk teenager.
It’s nearly 1am.
I head towards The Continental and arrive just as the band ends.
It was a big night and the greats were there and I missed it.
Meh, there’s always something to miss.

I’m comfortable with that, that’s the great thing about being older.
You just don’t care as much.
Indicated by my choice of footwear it seems.
The staff and I chat, they are fantastic people.
I take a million photo’s as they close up.
We exchange favourite bands.
I tell them all the greats in Australia.
‘Some are my mates’ I boast with childlike sparkle only a Birkenstock wearer would dare to gush.
They get this.
They get the passion I have for music.
I leave with hugs and smiles.
Awwww… Austin.

So, I didn’t get a root but I got small musical kisses on warm, summer night breezes and a little ache of how good a long, hard sweaty night in Austin could be.
I’ll be back Texas and you know what I’ll be wearing.
x