The charm of Smithy the law maker

The berth I booked on the ship over had four bunks.
I was late getting to it as I deemed it necessary to down a few dark ales in celebration of arriving at the ship on time after a few adventurous days driving through Bushranger country.

The women in the lower two bunks were deep in conversation and I wasn’t included. I’m sure my late arrival and disheveled traveling garb made the older woman dismiss me as not really that important to talk to and the other woman, younger and darker just seemed to want to be polite as foreign travelers are want to be.

The forth woman hadn’t arrived and when she did it beautifully proved that I, myself, am very polite too, when I didn’t throw her into the churning straight after her turning on the cabin light at 1am and then playing fucking mobile phone games while eating chips out of a packet with an inbuilt microphone.
5 am, I woke to her alarm and waited fuming while she took a 45 min shower and applied her makeup, hair spray and strawberry teenage body spray deodorant to add atmosphere to the murderous atmosphere she’d created.

The tourist and I exchanged glances between puffy red eyes and plumes of sickening scented wafts. I disembarked in Devonport after offering to take the tired tourist to Bernie as she was planing on catching a cab on a 45min journey. It wasn't where I was heading but a hobo on holidays with a car has a code to adhere to and that’s to help other travelers and find misadventures.

My tourist friend was sports woman who was here to compete in the masters games in the cut throat sport of badminton - the sport of pirates. She was an Indian national competing for the US and was quite delightful even though she called me spiritual. I assured her I was anything but. She giggled and said that only a spiritual person would say that.

We get to Bernie, have breakfast at the only café open and I generously showed her how to spread vegemite on toast and no, that’s not a euphemism.
After tea and toast I drive her to her hosts home. That’s when I saw him standing in the shadow outside his shop having a durrie.
His shop boy sitting on an esky in the sun. 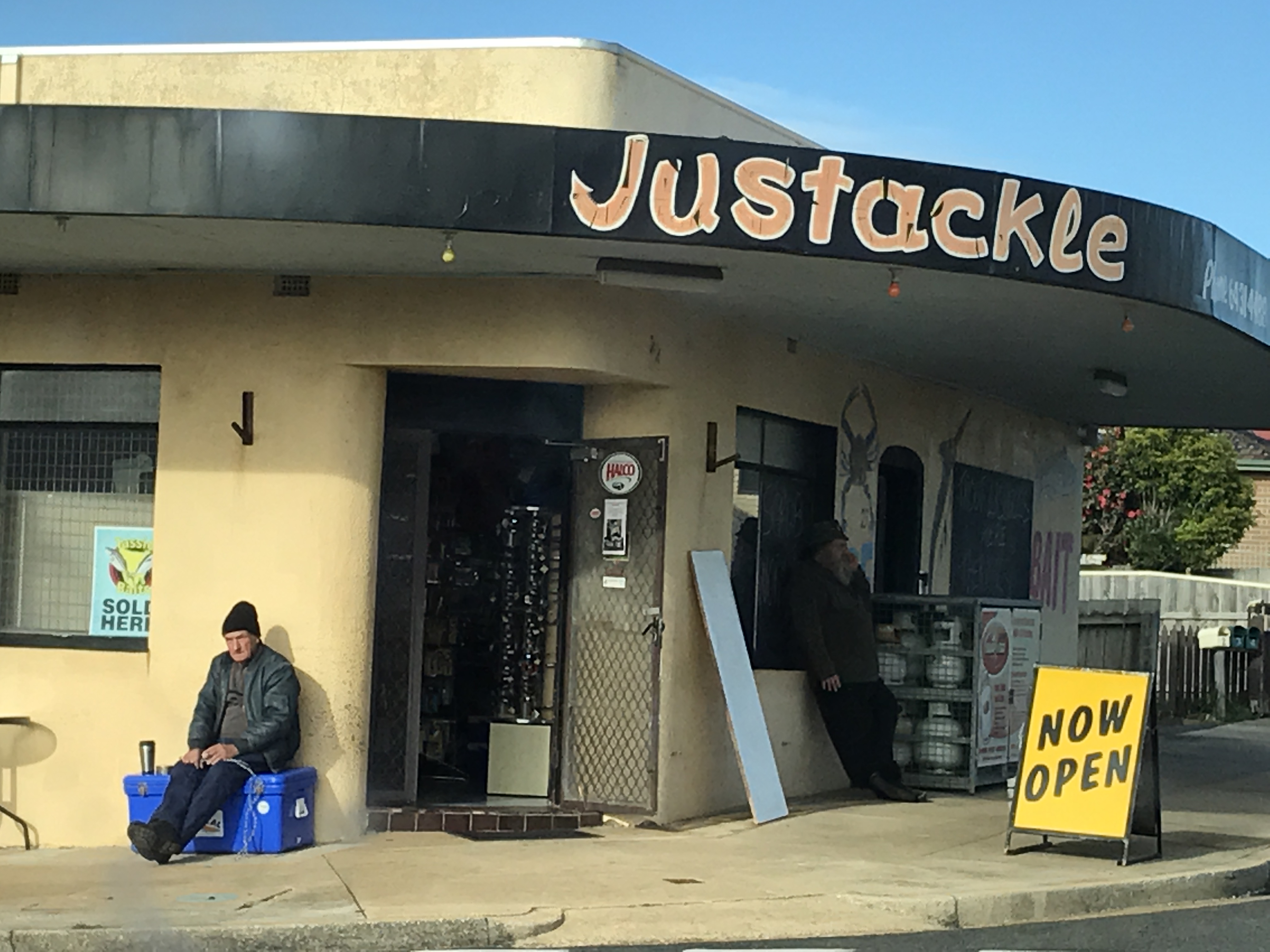 His low steely gaze bore through me from a block away and I knew I was going to have to stop and have a yarn, so I dropped off my charge and speed off down the hill to meet this man.

Chris is a fisherman and tackle shop owner who likes wearing slippers.
Chris is a fucking legend because…. well just look at him.

I introduced myself feeling like a fraud and a shyster as I’m a shit fisherwoman and the only claim I have to the sea is I occasionally swear like a sailor and I had only just got off a ship.
He accepts my eager handshake with a tree trunk palm and then proceeds to give the finger to another bloke stepping in the shop.

‘That’s venison he’s got in that bag. ‘ he informs me.

He looks at me and shakes his head at my shit joke. I laugh anyway.
Luckily, my job entails harassing old people so I got over my split second of shit joke awks and say

‘I bet you’ve got better jokes and some stories too, Chris?’

‘Yeah, I suppose I do. There’s a lot of stories round here but most are BS because that’s what fisherman do, tell bullshit’

I think about saying I reckon I’ve met a few ex-fishermen on tinder always talking BS but I don’t want him to get the wrong idea and besides size doesn’t matter?… anyway, I am here to get the gold so I get to the point and tell him I collect stories as I’m a muso and he says he likes artists and starts telling me about Smithy the law maker….. I’m perplexed but smile and nod, then after a moment I realise he’s talking about ‘lures’ not laws.

Smithy was a 'lure' maker and a master craftsman who made the dopest lures that he then hand painted with enamel and baked in his own oven.

I asked if he was still alive.
‘Nah, not after putting enamel in his over for years’
That’s not a euphemism either.

He goes out back of his shop and returns with a box of Smithy’s lures.
They are pretty amazing lures I agree.

Each copper piece is shaped like different kinds of fish and painted to dance like pole dancer in the deep blue.
As I look at each little creation, I feel so damn stoked I found a new art form and craft and I also found a new friend on the road.

Chris and I shake hand and paw again and I drive back along the simply incredible coastline through the daft named town of Penguin and think about all the stories that are dancing the the deep blue for me to hook.