Who the fuck does Ilona Harker think she is?!

Who the fuck does Ilona Harker think she is?
It’s taken over a year to be able to lock Ilona down for an interview, as a singer/songwriter/cabaretartist/visualartist/microbrewerist/soapboxer/mother/poet and poetess of lowbrow haiku, she's a busy one.
She also attempts to manage the much-maligned Mae Wilde, Byron’s favorite cabaret vixen. 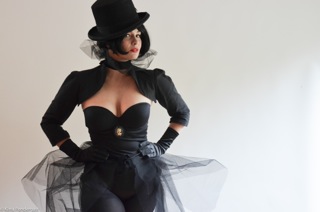 I arrive to my surprise Mae Wilde herself answers, explaining that Ilona was running late and would I like a bloody Mary, It was still morning so I declined as she whipped one up and proceeded to down it one surprisingly graceful move.

As we sat in Ilona’s ramshackle tree house in the hills, Mae was telling all about her quite extraordinary life, how she was the secret love child of Mae West and Oscar Wilde and her incredible journey when I remembered that I was here to interview and photograph Ilona.


‘Oh who knows when she’ll return, she’s orf getting my dry-cleaning from the gold coast, how about you take some photos of me while she’s gorne?’


So I set up the shoot and before had a chance to stop her, Mae had invited a few friends over and not surprisingly it turned into a circus, first there was Mae and all her dress ups and then there was Poppy Seed Loaf, a demented elf from Epping forest, England, who lived in Ilona’s garden and was trying to sell me some pyramid scheme/multilevel marketing thing. She insisted that it was a great business opportunity so I just smiled and nodded my head, before she then asked if I wanted any fresh
MDMA! 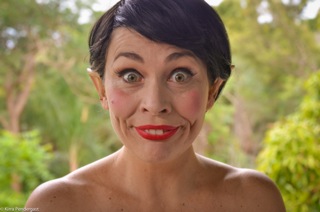 Thankfully another friend of Mae’s popped in as Poppy Seed was going in for the kill.
Mae by this stage was holding court with the gardeners out the back.

Emmy-loo Amethyst is a country/new-age singer from Texas who lourves dolphins, as she quickly pointed out when she met me.
She then whipped a Tibetan singing bowl out and gave me a ‘Heelin, for no charge mind you’
The afternoon was getting on and Ilona’s phone wasn’t answering so I stared packing up when there was a dreadful noise from the bathroom, that everyone was ignoring. 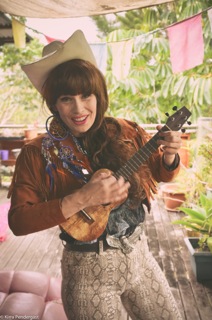 Deciding to investigate, I saw eyes rolling, what if it was Ilona and she had fallen down and couldn’t get up.
I opened the door and there was this lady/man/person swearing loudly in French Créole at the shower curtain. 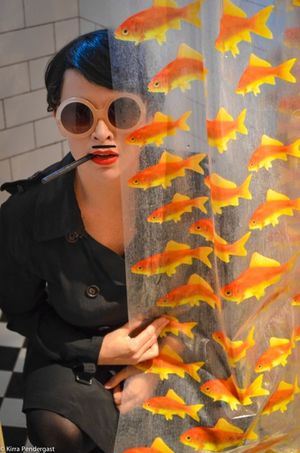 Emmy-loo followed me and explained that was I was witnessing was Coco Dada, an existential absurdist critic.
I felt like I was in a Cohen brothers film by this point and was trying to extradite myself from this weirdness, when there she was.

She was 6 ft golded skinned afro wielding latex clad behemoth. She was staring at me with a look like she was going to kill. 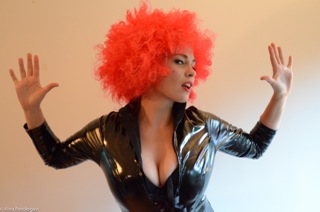 ‘Oh, don’t mind her’ drawled Emmy-loo  ‘We call her Foxy Bold, she’s a feminist alien refugee, she’s hiding here from the new Australian Government. She don’t speak any earth language but I am trying to communicate with her using my crystals’.

My headache was now turning into a migraine as I gingerly packed my camera gear just as Ilona walked in the front door.

She looked at me and broke down in tears.
After calming her down with a real bloody mary, I was able to finally understand why she was late.
It seems that Mae, Emmy-loo, Poppy seed, Coco and Foxy had decided to borrow her car and go to the Gold Coast for a night out.
She’d been with the police and her lawyer all morning trying to stop criminal charges for assault with a bucket of wet lubricated frogs, attempt to ‘heal’ a night club bouncer using crystal colonic therapy, possession of faux drugs, fraud and attempt to overthrow the Queensland government, suspected terrorism charges and harbouring a fugitive.

Emmy-loo came over with a bottle of rescue remedy and what Ilona told her is not fit for publication.
So unfortunately I missed out on the story of Ilona Harker and her new album...
‘Stories the sea told me, Lies I told the sea’ that is due for release as soon as she can find the time, I guess.
I guess we can do the interview about that another time.

She’s really got a quite handful at the moment.

All photos by Kirra Pendergast, all words by a mad woman.